Can California make a better lobster roll than Maine? 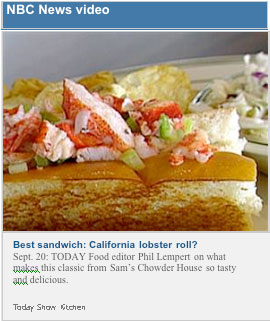 The idea of Sam's lobster roll being THE sandwich sensation in Half Moon Bay, 20 minutes south of San Francisco, sounded a bit like a stretch. After all, I’ve tasted, and enjoyed, lobster rolls from Maine to the famous Lobster Roll (along the stretch of the highway between Amagansett and Montauk on Long Island). But I was pleasantly surprised.

The lobster roll at Sam’s Chowder House is different. It’s typical to have loads of mayo or another similar type of dressing surrounding mini nuggets of lobster on a toasted hot dog bun … but here in Half Moon Bay there is no mayo. There's specially baked bread (which is then cut into hot-dog-bun rolls) and a delicate blend of herbs and diced celery. The lobster is lightly dressed with melted butter and in huge tender pieces. All in all, if you like lobster, there is no question that you will LOVE this sandwich.

Since Sam’s is right on the bay, with sailboats, foghorns and seagulls, you have the perfect setting for a delightful seafood eating experience. In fact, you might think that you were actually on the Northern shore of Maine, where fisherman will be dragging their daily catch from their boats to shore — but then the breathtaking West Coast sunset reminds you that you're some three thousand miles away. Not only might Sam’s lobster roll be the Best Sandwich in America, but it also might make those New Englanders a bit jealous!