A great pumpkin getaway to Half Moon Bay 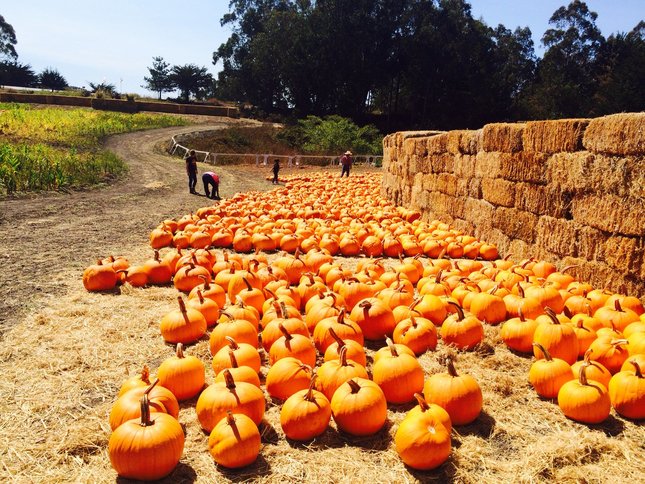 Back in 1932, amid the hardscrabble days of the Depression, two Half Moon Bay boys began growing pumpkins to feed to the hogs on the family farm. One day, John and Clarence Arata were hauling their gourds along their field on Highway 1 when a passing motorist asked if he could buy a few. Elated at the chance to make some extra dough during such lean times, the brothers sold their pumpkins for a princely 25 cents each, unwittingly setting the stage for their hometown -- once notorious for rumrunners, bootleggers and speak-easies -- to become what locals proudly hail as the Pumpkin Capital of the World.

Nowadays, droves of patches are located all around Half Moon Bay, which was once known as Spanishtown. Some are tricked out with jumpy houses and face-painting booths, while others take the rustic, old-school approach. At the Arata farm, you can get your spook on in the haunted house or get lost in the colossal hay maze. The Lemos' operation tickles tots with pony rides, two bouncy houses, a train ride and "the Dig Zone," where kids can safely operate a back hoe. (Hoisting up a great big pile of dirt and then dumping it out with a galumphing thud is the sort of thing my little one can do. All. Day. Long.)

And Farmer John prefers straight farm-style: "We don't do jumpies. We don't do face painting. This is a farm, we do pumpkins," he says gesturing to the never-ending rows of heirloom pumpkins in hues from bright orange and dazzling white to pitch black.

Our pumpkin pilgrimage included all three patches and several fields because my almost-5-year-old daughter has been gaga about gourds since she was a baby. Considering she's nicknamed "pumpkin," it's high time she got to wander through this wonderland of autumnal bounty. A bumper crop, anywhere from 2,000-4,000 tons of pumpkins, is currently being readied for the world-famous pumpkin festival and, of course, the spooky Halloween festivities thereafter.

From endless rolling fields ablaze with orange gourds to the autumnal treats (pumpkin risotto, anyone?) on local menus, this is the place to be if you're jazzed about jack-o'-lanterns. From mint-green heirloom orbs to gigantic tangerine fatties, this is the promised land of pumpkins. Daphne was also thrilled (and a little scared) to see the giant copper dinosaurs lurking amid the homespun farms as you enter town on the serpentine Highway 92.

All that traipsing through patches made us famished so we headed to the lunch spot, the perpetually crowded Sam's Chowder House, with its luscious lobster rolls and gobsmacking views of the crashing waves of the Pacific. Everything about this unpretentious and fun place reminded me of my East Coast childhood. Daphne couldn't tell what she liked best about Sam's, the silky ahi tuna poke or the fire pits that seemed to cry out for marshmallow roasting. S'mores are compulsory for the kindergarten set, but we saved that for later in the day at the classy (and kid-friendly!) Ritz-Carlton, high on a bluff overlooking the ocean.

Instead, it was time for a stroll along the cotton-soft sand. The placid waters below Sam's were far too tempting for Daphne, who jumped in fully clothed, had a whale of a time, then showed up at the Ritz soaking wet and rather sandy (egads!). She was also madly in love with the beach beneath the Ritz, which has hidden caves and mysterious columns to explore, and the dazzling, wide expanse of sand between Pomponio and Pescadero beaches. Leapfrogging into the surf, building sandcastles and watching sea lions cavort was almost as fun as s'mores.

We had also hoped to climb the epic hills of white sand at Dunes Beach and savor the tasty goat cheese (and visit the friendly goats) of nearby Harley Farms Goat Dairy, but we came to the conclusion that this coastal hamlet has far too many amusements for one weekend. Plus, it was hard not to lounge around the terrace of the Ritz and steep in the serene siren song of the bagpipes at sunset.

Indeed, on our last day, we spent so much time gazing into myriad tide pools, searching for starfish and sea urchins, we ran out of time to visit a lighthouse on the way home. Alas, basking in the mist while listening to the moan of the foghorn will just have to wait until our next visit.