Five Things to Know About Eating Inside the New Chase Center

More than 18,000 seats deep, with the largest LED screen in NBA history, the brand new and sparkly Chase Center opens next week — and sports fans and concert goers won’t have to suffer through sad nachos to survive the game. It’s still stadium food though, with thousands of pounds of barbecue and pizza dough, courtesy of food-service corporations Bon Appétit Management Company and Levy Restaurants. But there are also some interesting options from smaller local restaurants, including dim sum, lumpia, and tamales.

Stay tuned for a full guide to all of the food and drink vendors, coming closer to the first concert week. But for now, here are some things to look out for. 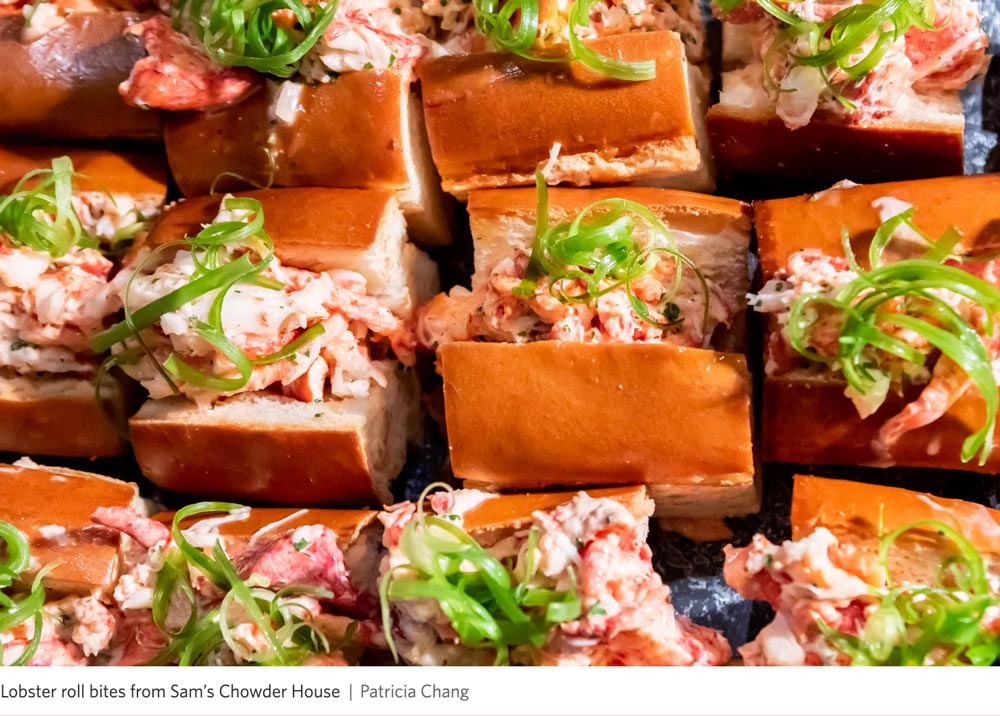 There are some throwbacks to try

The Burgerdog from Hot Dog Bill’s was the fan favorite with season ticket holders, who got an early taste last week. Dating back to 1950, exclusively served at the Olympic Club, and beloved by Herb Caen, it’s exactly what it sounds like — ground chuck on hot dog bun, hit with special sauce. The other early front-runner seems to be the lobster roll from Sam’s Chowder House, the Half Moon Bay institution, featuring hunks of seafood cloaked in the right amount of mayo.

The “theater boxes,” are a string of 60 connected four-person tables, pictured above, with seats facing the court. It’s all very luxe — a long stretch of red banquets faces a gold-trimmed bar and serving stations, shared by the entire section. Buy a box for four people, and it’s an all-inclusive for food and drinks, including chips and guacamole, pretzel knots with mustards, Nashville-style hot chicken sliders, Sam’s lobster rolls, and more. There will also be carving stations, tossed pastas, salad bars, and a well stocked bar. Chase wasn’t ready to share the price of a four-person box just yet, so stay tuned.

The cantina is an open-air bar, way up in the rafters in a dark corner with long bars and lots of high tops. Up to 148 season ticket holders can purchase assigned seats and hang out here all season. If you’re not a season ticket holder, up to 150 people can also just walk in. It’s $55 for a buffet of food and there’s a separate cash bar. Despite the location’s Mexican sounding name, the menu includes a global mashup of comfort foods like salsa and tortilla chips, a wedge salad with blue cheese and bacon, pork belly bao, baked penne pasta, and chocolate s’mores.

There’s a super luxury option too

The 32 courtside lounges, including front-row seats and a full dining experience, are clearly the most luxurious way to take in the entertainment here. Each block of seats in the stadium is linked via a short tunnel to an underground lair, and comes not just with food and drink, but a wine vault, which you can fill with your own bottles or request to have stocked. A dedicated server (which they are calling a “private butler” in a strange nod to a bygone era) is ready to pass appetizers like cheese, charcuterie, and crostini, and hand out and top up glasses of champagne. It’s an obvious play to local tech execs, including wifi, if anyone wants to call it a satellite office. Chase Center wouldn’t confirm pricing, but annual fees will get into seven figures.

Half Moon Bay has several pretty waterfront seafood restaurants, but Sam’s Chowder House is a consistent favorite for good reason. Emulating a classic East Coast chowder spot, the restaurant makes a rich, bacon-studded clam chowder; a soft, buttery lobster roll; and a shrimp Louis amped up with blue crab. The extensive patio overlooks the endless blue of the ocean and, thankfully, is lined with heat lamps. 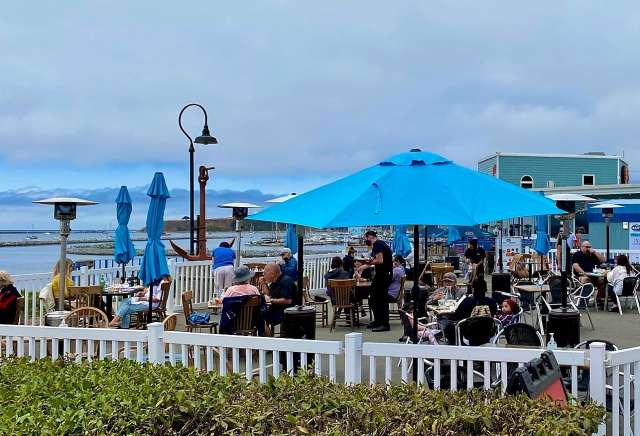 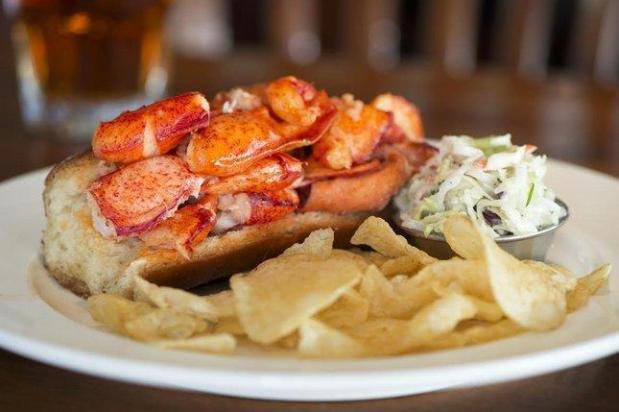 Whether you’re beach bound or hitting the Half Moon Bay Coastal Trail — or Devil’s Slide to the north — you’ll need to refuel. Here are three tasty options near the coast.

Located in a charming, bright red caboose on Highway 1, this casual roadside counter-service spot hails from chef-owner Scott Clark, who spent three years at San Francisco’s Michelin-starred Saison. Here Clark turns out decked-out burgers ($12) made with grass-fed beef or maitake mushrooms, topped with melty cheese and a soft egg and served on grilled Rosalind Bakery white bread. The potato chips are housemade, the herb salad tossed with a Meyer lemon vinaigrette and there are seasonal specials, too.

Details: The popular eatery menu occasionally sells out — especially on weekends — so if you’re going on the late side, you’ll want to call ahead. Open from 11 a.m. to 4 p.m. Thursday-Sunday at 225 Cabrillo Highway in Half Moon Bay; www.dadsluncheonette.com

How can you resist a big ol’ barn that proclaims itself Barnalicious? Add in outdoor beer garden seating, Four Barrel Coffee and locavore fare, including Marin Sun Farm Barn Burgers ($10.50), What the Cluck chicken sandwiches ($15.25), deep-fried Mac Attack ($6.50) and seasonal salads, all made with ingredients from nearby producers. Order at the window, then grab a perch in the tent or garden.

Details: Open from 11 a.m. to 7 p.m. Wednesday through Saturday and until 6 p.m. on Sunday at 3068 Cabrillo Highway in Half Moon Bay; www.thebarnhmb.com.

This Half Moon Bay seafood mainstay has not yet reopened for indoor dining — renovations are still underway to make the interior safer for guests — but don’t fret. Sam’s full menu is available for alfresco dining. And you can still get those signature lobster rolls ($27) and chowder ($9) at the eatery’s takeout window to enjoy at the beach or on the lower lawn. (That chowder is available by the quart to reheat at home, too.)

What's on the menu? Food at the new Chase Center

SAN FRANCISCO (KRON) — The new home of the Golden State Warriors will open with a whole new menu of Bay Area bites!

The first game at the Chase Center is a little over a month away but KRON4’s Sara Stinson got a chance to taste some of the food the arena will offer.

According to the Chase Center’s Culinary Director Mark Jeffers, the arena has partnered with 10 to 12 local restaurants and will have 37 different eateries for patrons.

“We’re partnering with different local restaurants to create some amazing different flavors of the bay,” Jeffers explains. “We’re picking from each neighborhood to give a reflection of San Francisco as you eat around the arena.”

Here’s some of the food you can find around the arena:

The incredibly popular Sam’s Chowder House in Half Moon Bay will be serving up classics like their lobster rolls. 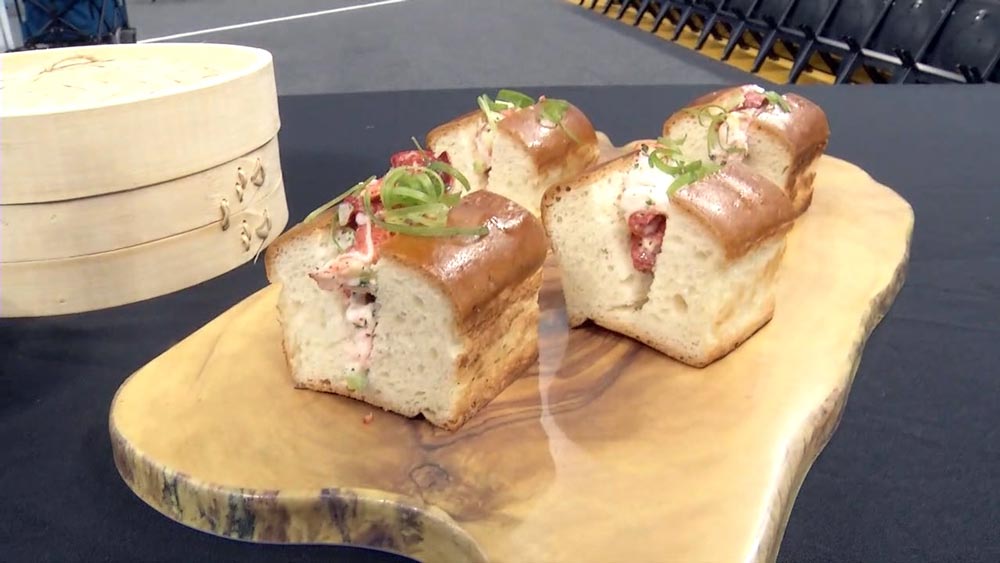 “We’re definitely upping the game in terms of the food,” Jeffers claims.

Of course, fans will still be able to find classic game food like hot dogs, but Jeffers said “we wanted to make sure people had a different experience when they came to the Chase Center for food.”