Raised on opposite coasts, both near the ocean, co-founders Paul and Julie Shenkman share a passion for delicious seasonal cuisine, and fresh seafood. Culinary entrepreneur Paul Shenkman began his restaurant journey as founder and original proprietor of Half Moon Bay's Pasta Moon, nationally known for its authentic Italian cuisine and wines, and he was himself the chef there for several years.  Julie left her career in technology to join him on his next venture, Half Moon Bay’s Cetrella, which they owned until 2006, and which rapidly became a national success featured in Gourmet Magazine.

Together they opened the original Sam's Chowder House in Half Moon Bay in 2006, along with Executive Chef and Partner Lewis Rossman. The restaurant quickly became a favorite gathering place for people throughout the Bay Area, and was named top three "Best Outdoor Dining" restaurants by San Francisco Magazine, and "Best Seafood Restaurant in the Bay Area" several years in a row by San Francisco's Best of the BayList.

Guest feedback inspired the team to create a mobile version, and Sam's ChowderMobile was born. One mobile truck quickly became several, and Sam's ChowderMobiles now travel throughout the Bay Area serving Sam's famous seafood on daily lunch and dinner routes and for private parties ranging from corporate events and block parties to weddings.

The ChowderMobile has been featured on The Discovery Channel's Top Ten Fab Food Trucks on "Best Food Ever", as well as on the Cooking Channel's hit show "Eat Street". In 2013, Sam's ChowderMobile won all five rounds of the FOOD TRUCK FIGHT to become the "Top Food Truck in the Bay Area" on San Francisco's Bay Area A-List. 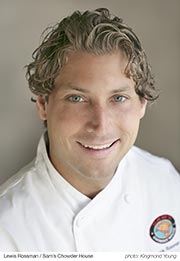 Lewis Rossman has contributed to the success of some of the Bay Area's top dining spots.  Under his culinary leadership as Executive Chef and Partner at Sam's Chowder House in Half Moon Bay, the restaurant has garnered many awards such as TOP FIVE "Best Sandwiches in America" by NBC's The Today Show and "Best of the BAYLIST" by San Francisco Chronicle's SFGATE.  As opening team member and later Executive Chef of Cetrella in Half Moon Bay, California, he won many accolades, including "Culinary Hospitality Restaurant of the Year" in the U.S. by Sante Magazine.  As Chef de Cuisine at Acquerello, rated one of Wine Spectator's "10 best Italian Restaurants in the U.S.", Rossman worked closely with award-winning chef Suzette Gresham. Today, Rossman participates in the overall management of both locations of Sam's Chowder House, Sam's ChowderMobiles, and the team's San Mateo restaurant, Osteria Coppa. He also directs all kitchen operations at Sam's, including the development, creation and execution of the menus. Read more...